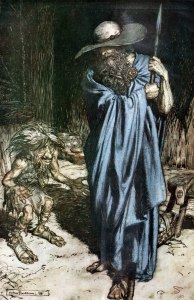 There’s an all-too-common discussion in Heathen groups between beginners and self-proclaimed experts or old-timers. It gets repeated so often that even fairly inexperienced Heathens can give the “right” answers.

“What books on Heathenry should I avoid?” the newbie asks.

“Anything by D.J. Conway. What a fluffy new ager!”

“Silver Ravenwolf ruined everything by bringing in all those stupid teen witches! UGH!”

I’ve mentioned several times before on this blog that I have an especially close relationship with Wudan. (That’s Odin or Woden for folks outside of Deitsch-inspired Heathenry.) As many who are inspired by Him can relate, He gives His followers an insatiable hunger for knowledge. I experience it as a burning curiosity about almost everything in life, and a willingness to pursue the subjects I truly love late into the night, for days on end before even taking a break. Wudan Himself demonstrates this hunger by wandering the world in search of knowledge, undergoing extreme ritual ordeals for wisdom, and making deep personal sacrifices to gain His treasures of the mind. To Wudan, no type of knowledge is forbidden. He consults with the severed head of a dead giant (Mimir), raises a dead sorceress to answer His questions via necromancy, and engages in the ergi (unmanly) practices of seidhr which He must learn from the Goddess Freya. He works all manner of evils as Bolverk (literally evil-doer) in order to steal the mead of wisdom, including causing nine men to kill each other.

We are fortunate that so much of Heathenry survived, even into modern times. We are blessed with medieval texts, archaeological finds, folklore, and practices that survived alongside Christianity like Braucherei (a main source of inspiration for Urglaawe). But much has also been lost.

I’m passionate about understanding the religion of the ancient Germanic peoples that we now refer to as “Heathenry”. I want to understand where it came from, why it arose, what it consisted of, how it changed over the centuries, and what it is today, in modern reconstruction and revival. I want to know where it’s been and to help create what it could be. So I search out everything I can possibly find–everything from Proto-Indo-European linguistics to medieval Icelandic grimoires to Pennsylvania German home remedies.

I don’t care if that knowledge is hiding in a book I’d get made fun of for reading. What sacrifice is that next to what I could gain? Wudan sacrificed His eye for wisdom. If all I have to sacrifice is getting a few taunts from people on the internet who don’t matter, I’ll take that deal. And I’ll ravenously open every book I can find until I get there.

He would ask no less of us.

One response to “You Should Read Bad Books”